Sonochemical decontamination of magnesium and magnesium-zirconium alloys in mild conditions 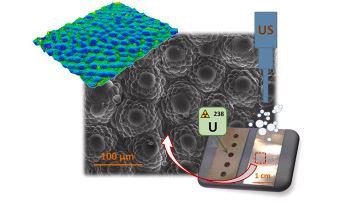 UNGG cladding nuclear wastes constitute a huge volume of Mg-based materials that raises economic and safety concerns, particularly due to their radioactivity coupled to the potential generation of H2 gas under deep underground disposal. Their significant decontamination would result in more secure and less expensive storage, with a better containment of the separated long-lived radioisotopes that could enter in a classical channel. Sonication of genuine UNGG cladding materials and simulants at 345 kHz in 0.01 M oxalic acid solution (20 °C) allowed the structuring of their surfaces with the observation of homogeneously distributed craters of 20-40 µm in diameter. After a thorough characterization and comparison of the ultrasound effects generated at the surface, the various samples were artificially contaminated and characterized before sonication. The complete and rapid sonochemical decontamination of Mg-based materials was then observed, in addition to the removal of the carbon layer promoting corrosion on the inner UNGG cladding. The extension of sonication allows the neo formed brucite (Mg(OH)2) and zirconium-based phases to accumulate on the surface, thus contributing in a slight but continuous surface recontamination process. This phenomenon results from the re-adsorption of uranyl cations from the solution which can be avoided by optimizing the duration of treatment.