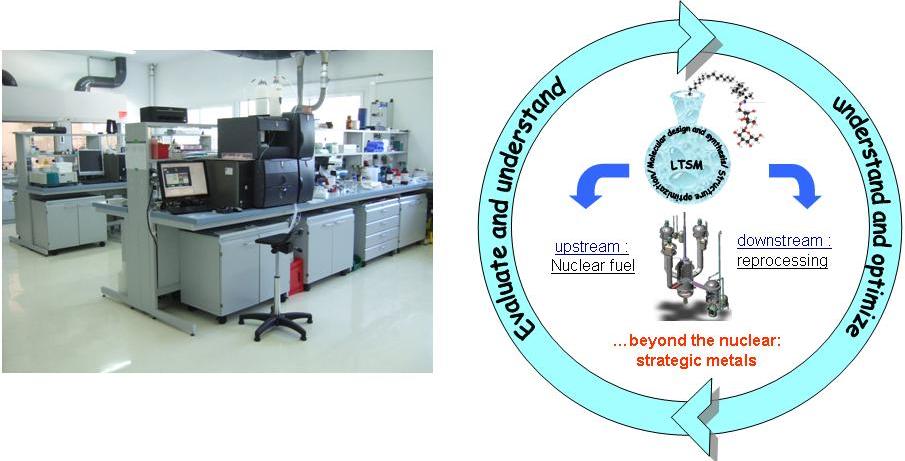 The main objective of LTSM is to lead fundamental research based on the understanding and control of the chemical and physical phenomena that influence the ion separation conditioned by self-assembled molecular systems (micelles, microemulsions, colloids, liquid crystals). The topics are thus focused on the synthesis of specific ligands and materials for ion separation in conventional (liquid / liquid, solid / liquid) or unconventional (membranes, ionic liquids…) extraction processes with an orientation in understanding the mechanisms that govern the affinity and selectivity. The mission aims at taking the approach to a fine characterization associated with modelling in order to develop predictive models that will allow for an optimization of the extract ant systems.

In the processes associated with the recycling (nuclear or not), when an ion in solution is in equilibrium through an interface with a dispersion of ligands, the aqueous phase and the non-aqueous solutions are far from ideality. These are self-assembled organized molecular systems (micelles, microemulsions, colloids…) that can be considered as reactive "nanophase", in terms of statistical thermodynamics. These nanophases scattered have very potent and selective cooperative effects that are the basis of efficient and controlled processes for the ion separation. However, because of "tunneling effects" due to the species adsorbed at the interfaces, these nanophases are often at the origin of limited effectiveness of the ion separation methods, in terms of mass flows. This topic is one of the main missions of LTSM. Indeed, it aims at optimizing the selective ion separation processes by developing and synthetizing specific original extract ant molecules and by studying the mechanisms associated that govern the selectivity, including cooperative supramolecular phenomena. The ability to exalt the complexation by self-association of complexing reactants in micelles, fibrils or liquid crystals, has to be explored. This can lead to innovative processes for selective ion separation, which will then be developed in collaboration with the R&D chemical engineering teams of Marcoule. Beyond the purely nuclear field, these selective effects have to be studied and implemented in different processes related to the recycling of row materials associated with the energy production, and more generally to the prospects for sustainable development, such as decontamination or for the selective recycling of strategic metals.